This large inflatable rat is a common sight at protests of non-union worksites in New York City.

As an attorney who practices in the metropolitan area, I often find myself traveling into New York City. I am amazed at the amount of construction that I see; the cityscape is changing and evolving rapidly. This construction boom means more business, a steady paycheck for workers, and more money for the city and state. Unfortunately, with the rise in construction also comes a rise in safety violations, injuries, and fatalities.

The New York Committee for Occupational Safety and Health (NYCOSH) recently issued a report called Deadly Skyline regarding construction fatalities in New York State. A summary of their findings notes that from 2006 through the end of 2015, 464 construction workers died while on the job, with falls as the leading cause of death. When a fatality occurred, safety violations were inherent in more than 90 percent of the sites inspected by the Occupational Safety and Health Administration (OSHA). The report pointed out that non-union work sites had twice the safety violations of union sites, and in 2015, 74 percent of the fatalities occurred on non-union projects with the majority of the fatalities involving Latinos.

It is painfully obvious that shortcuts and cost-saving measures result in injury and death. Many employers use misclassification as a means to save money. Misclassification occurs when an employee is labeled as an “independent contractor” so that a business owner doesn’t need to pay Workers’ Compensation insurance, Social Security, Medicare, or unemployment taxes. Some even resort to paying employees off the books as well in an effort to save money. This may not seem troublesome until you realize that this is a one-sided deal that really only benefits the employer. According to the NYCOSH report, misclassification of workers allows an employer to skirt the safe workplace requirement as OSHA does not cover independent contractors.

Employers must provide Workers’ Compensation insurance for their employees, and typically must notify their Workers’ Comp carrier as to the number of employees they have and the type of work they do. A risk analysis is performed and then employers are assigned a premium to pay in order to cover their workers in case of injuries. If injuries occur, premiums may be increased accordingly. Obviously employers in high-risk businesses must pay more for their premiums than those with employees involved in low-risk jobs. As injuries on misclassified workers do not add to an employer’s bottom line, there is less incentive to provide safety measures if it cuts into profits.

To make construction sites safe, NYCOSH recommends adequate education and training as well as legislation to punish those whose willful negligence causes a death. They also recommend passage of the NYS Elevator Safety bill that requires the licensing of persons engaged in the design, construction, operation, inspection, maintenance, alteration, and repair of elevators. It would also preserve Section 240 of the New York Labor Law, commonly referred to as the “scaffold law,” which governs the use of scaffolding and other devices for the use of employees. Weakening the Scaffold Law would shift safety responsibility from owners and general contractors who control the site, to workers who do not control the site and are in a subordinate position.

It is a true tragedy when someone is maimed or killed in an accident that could have been prevented. Not every employer engages in these tactics, and most workplaces are generally safe spaces for workers. However, even one death is too many. I found a recent story from California very troubling. The nation’s largest assisted living company agreed to pay $2.2 million to settle claims for underpayment and mistreatment of the workers who take care of the elderly. Lack of proper overtime pay, lack of mandatory meal and rest periods, and improper payment of mandatory training are examples of the mistreatment.

The victims were the least-paid workers who did the hardest physical labor, according to the story. These people who bathed, fed, and provided the most hands-on care for our frail, elderly loved ones were denied wages and overtime pay for 7 years, according to the terms of the settlement.

Care for the old, frail and disabled is big business. Nearly 750,000 people are receiving assisted living care, according to the ProPublica article. And the industry is just going to expand, as folks are sicker but have higher expectations for care, while also living longer, according to this article from NPR.

Fair treatment of our elders’ caregivers is essential. The wages are low, as most difficult jobs often are. Violating employment rules and statutes for businesses to save money and make larger profits seems particularly offensive for these workers. And they are not often protected from or informed of the hazards of their jobs, many of which can have serious consequences for workers’ health and well being, according to these blog posts from respected colleague Jon Gelman, an attorney in New Jersey: Protecting Healthcare Workers is a Goal of NIOSH and NIOSH Acts To Prevent Lifting Injuries For Home Healthcare Workers.

Congratulations to the workers and their representative who stood up to this very large employer that has around 500 facilities in the United States. It takes courage and tenacity to fight battles like this.

All of us who care about workers need to be aware that these are battle worth fighting. And that these battles can be won.

OSHA is being prevented from fulfilling its mission.

In 1970, Congress passed the Occupational Safety & Health Act (the Act), which created the Occupational Safety & Health Administration (OSHA). Among other things, the Act requires every employer to provide a safe workplace. To help employers reach this goal, OSHA promulgated hundreds of rules in the decade after it was created. OSHA’s rulemaking process has, however, slowed to a trickle since then.

While the National Institute for Occupational Safety & Health recently identified over 600 toxic chemicals to which workers are exposed, in the last 16 years OSHA has added only two toxic chemicals to its list of regulated chemicals. This is because Congress, Presidents and the courts have hamstrung OSHA. For example, in March 2001 the Bush Administration and a Republican Congress effectively abolished OSHA’s ergonomics rule, a rule the agency had worked on for many years.

These delays and inactions have caused more than 100,000 avoidable workplace injuries and illnesses.

These delays and inactions have caused more than 100,000 avoidable workplace injuries and illnesses. Workers are being injured and killed by known hazardous circumstances and OSHA can’t act.

Congress and the President need to break this logjam – we need to free OSHA to do its job of safeguarding workers.

Exposure to harsh chemicals and repeated bending can take its toll.

As we shared with you last week, hotel housekeeping may not seem dangerous, but it can be grueling physical labor.

A recent study published by the National Institute for Occupational Safety and Health reported that tasks including dusting, vacuuming, changing linens, making beds, and scrubbing bathrooms may lead to a range of injuries. Some of the most common ones include:

END_OF_DOCUMENT_TOKEN_TO_BE_REPLACED 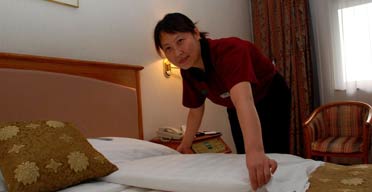 Hotel room cleaning is a job that comes with risks.

Hotels can be a dangerous place to work. According to the U.S. Bureau of Labor Statistics, of all service industry workers, hotel workers have the highest rate of injury at 5%. The average for all service industries is only about 3.4%.